History of the courts

How Wisconsin's judicial system was established 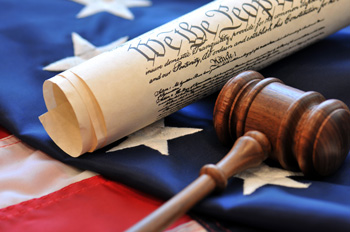 The basic powers and framework of the court system in Wisconsin were established by Article VII of the Wisconsin Constitution when Wisconsin became a state in 1848. At that time, judicial power was vested in a Supreme Court, circuit courts, courts of probate, and justices of the peace. Subject to certain limitations, the Legislature was granted power to establish inferior courts and municipal courts and determine jurisdiction.

The constitution originally divided the state into five judicial circuit districts. The five judges who presided over these circuit courts were to meet at least once a year in Madison as a "Supreme Court" until the Legislature established a separate court. The Wisconsin Supreme Court was instituted in 1853 with three members chosen in statewide elections—one as chief justice. In 1877, a constitutional amendment increased the number of associate justices to four. In 1903, the Constitution was amended to increase the number of justices to seven, as it remains today. An 1889 amendment established that the longest serving justice serve as chief justice. In 2015, the constitution was amended to provide that the chief justice is to be elected by the Court. (For historical information on Supreme Court justices visit the courts section of this site.)

Over the years, the Legislature created a large number of courts with varying types of jurisdiction. As a result of numerous special laws, there was no uniformity among the counties. Different types of courts in a single county had overlapping jurisdiction, and procedure in the various courts was not the same. A number of special courts sprang up in heavily urbanized areas, such as Milwaukee County, where the judicial burden was the greatest. In addition, many municipalities established police justice courts for enforcement of local ordinances, and there were some 1,800 justices of the peace.

The 1959 Legislature enacted Chapter 315, Laws of 1959, effective January 1, 1962, providing for the initial reorganization of the court system. This plan was refined in subsequent sessions.

Under the 1959 law, the jurisdiction of the Supreme Court and circuit courts remained unchanged. The most significant feature of the reorganization was the abolition of special statutory courts (municipal, district, superior, civil, and small claims). In addition, a uniform system of jurisdiction and procedure was established for all county courts.

Another important change created the machinery for smoother administration of the court system. One problem under the old system was the imbalance of caseloads, heavy in some locations and light in others. In some cases, the workload was not evenly distributed among the judges within the same jurisdiction. To correct this, the Chief Justice of the Supreme Court was authorized to assign circuit and county judges to serve temporarily as needed in either type of court. The 1961 Legislature took another step to assist the Chief Justice in these assignments by creating the post of Administrative Director of Courts. This position has since been redefined by the Supreme Court and renamed the Director of State Courts. In recent years, the director has been given added administrative duties and increased staff to perform them.

In April 1977, voters ratified an amendment to Article VII, Section 2, of the Wisconsin Constitution, which outlined the current structure of the state courts:

The judicial power of this state shall be vested in a unified court system consisting of one Supreme Court, a court of appeals, a circuit court, such trial courts of general uniform statewide jurisdiction as the Legislature may create by law, and a municipal court if authorized by the Legislature under section 14.

In June 1978, the Legislature implemented the constitutional amendments by enacting Chapter 449, Laws of 1977, to provide a court system composed of circuit courts, a court of appeals, and municipal courts with revised authority.

For more court history visit the specific court you are interested in:

Also read Commemorating the 200th anniversary of Marbury vs Madison (external link) The U.S. Supreme Court case that established the judiciary as an independent, co-equal branch of government, was 200 years old in 2003.