Famous cases of the Supreme Court 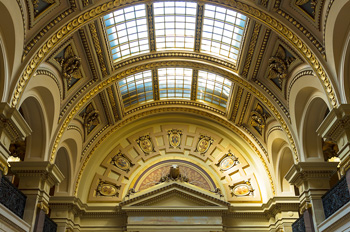 Famous Cases of the Wisconsin Supreme Court features 25 cases selected for their great importance, their interest, or simply their use as examples of the type of cases this court has handled at any given time in history. (Cases are provided in PDF format.)

Famous Cases of the Wisconsin Supreme Court (all 25 cases)

Attorney General ex rel. Bashford v. Barstow 4 Wis. 567 (1856)
This case helped to create the tradition of independence and honesty that has marked Wisconsin politics and law ever since. Further, the case established the independence of the Wisconsin Supreme Court and the important principle that the Court has the power to interpret the state Constitution. The Wisconsin Supreme Court removed an incumbent governor from office after it was discovered that his victory was the result of fraud.

Chamberlain v. Milwaukee and Mississippi Railroad 11 Wis. 248 (1860)
This case represents an early effort on the part of the courts to give rights to injured workers. In this case, the Wisconsin Supreme Court determined that an employer can be held responsible when negligence on the part of one employee injures another employee.

In re Kemp 16 Wis. 382 (1863)
This Civil War-era case provides another example of the state Supreme Court taking on the federal government. In this case, the Court ruled that President Abraham Lincoln could not suspend the writ of habeas corpus (which preserves one's right to due process) for civilians when marshal law was not in effect. Military troops had seized Kemp and imprisoned him after he helped to stage a draft riot.

Whiting v. Sheboygan & Fond du Lac Railroad Company 25 Wis. 167 (1870)
Whiting established the important principle that the government may not impose a tax on its citizens for a private purpose. In this case, the Wisconsin Supreme Court held that Fond du Lac County could not levy a tax on county residents to raise funds for the completion of a railroad.

Gillespie v. Palmer and others 20 Wis. 544 (1866)
The decision of the Wisconsin Supreme Court in Gillespie extended the right to vote to black residents of the state. The question had been put on a referendum, which had passed, but election inspectors attempted to keep black people from voting by arguing that the vote had been misconstrued. A unanimous Court held that the vote was valid.

Attorney General v. Chicago & Northwestern Railroad Company 35 Wis. 425 (1874)
This case, popularly referred to as Attorney General v. Railroad, marked the beginning in this state of the great struggle between corporate power and privilege and the rights of the individual citizen. The Wisconsin Supreme Court in this case decided that the state did, indeed, have the authority to regulate railroads. This curtailed the railroads' ability to arbitrarily set rates for freight and passenger fares in each community. Up to this point, the railroads had been able to set very low or very high rates if they chose—which could make or break a community.

Motion to admit Miss Lavinia Goodell to the Bar of this Court and Application of Miss Goodell 39 Wis. 232 (1875) and 48 Wis. 693 (1879)
These cases stand as a testament to the obstacles women faced in the 19th century as they attempted to work in traditionally male professions. Lavinia Goodell was a Janesville attorney and the first woman to apply for admission to the bar of the Wisconsin Supreme Court (at that time, practice before the state's high Court required admission to a separate bar). In the first case, her application was denied; in the second, following a legislative act that prohibited denial of bar admissions based on gender, she was admitted.

Vassau v. Thompson 46 Wis. 345 (1879)
This case is the only one in this group that is neither famous nor particularly important to the development of Wisconsin law. It is included here as an example of the type of cases the courts often handled in the 19th century. It centered on the question of whether an individual could be held responsible for the damages caused when his dog bit a cow.

Brown v. Phillips and others 71 Wis. 239 (1888)
In this case, in a unanimous opinion, the Wisconsin Supreme Court declined to expand women's suffrage. In doing so, the Court narrowly interpreted a state statute which gave women the right to vote only on school-related matters. In the opinion, the Court emphasized that the power to grant suffrage belonged to the Legislature.

State ex rel. Weiss and others vs. District Board, etc. 76 Wis. 177 (1890)
In this case, popularly known as the Edgerton Bible case, the Wisconsin Supreme Court determined that Bible reading in public schools is unconstitutional. Until this point, the King James Bible had been recommended as a textbook by the state superintendent of schools.

The State ex rel. Attorney General v. Cunningham and The State ex rel. Lamb v. Cunningham 81 Wis. 440 (1892) and 83 Wis. 90 (1892)
These cases demonstrate the power struggle, which is designed into a democratic system, among the three branches of government. The Wisconsin Supreme Court outlawed gerrymandering; that is, drawing creative legislative districts to preserve partisan political advantage.

Nunnemacher v. State 129 Wis. 190 (1906)
In this case, the Wisconsin Supreme Court upheld a tax on inheritance, one of the key laws of the Progressives. In issuing this opinion, the Court departed from a course charted by many courts around the nation which had found a natural right to inherit and had determined that legislatures could not interfere with this right by levying a tax.

Borgnis and others v. The Falk Company 147 Wis. 327 (1911)
In this case, the Wisconsin Supreme Court unanimously upheld a law creating workers' compensation and strengthened the rights of employees by finding that the law covered even individuals employed in "non-hazardous" trades.

John F. Jelke Company v. Emery 193 Wis. 311 (1927)
This case centers on a quirky Wisconsin law that made it a crime to manufacture or sell margarine in the state. The Legislature had enacted the law in 1925 to aid the dairy industry. An unanimous Court found that the Legislature had no power to attempt to regulate competition to give one industry an advantage over another.

State ex rel. Drankovich v. Murphy 248 Wis. 433 (1945)
In this case, the Wisconsin Supreme Court strengthened the right to legal counsel for defendants in criminal matters, determining that trial judges must make these individuals aware of this right and that a lawyer must be provided at public expense, when necessary, even if the defendant does not request counsel.

State v. Yoder 49 Wis.2d 430 (1971)
In this case, the Wisconsin Supreme Court weighed the state's interest in educating children against the First Amendment guarantee of religious freedom. The Court held that a state law requiring children to attend school full time was unconstitutional because it infringed on the freedom of the Amish to practice their religion. In reaching this decision, the Court distinguished itself from courts around the country that had upheld compulsory education. The case was appealed to (and affirmed by) the U.S. Supreme Court.

State v. Stevens 123 Wis.2d 303 (1985)
In the 1980s and 1990s many cases have come to the courts challenging the validity of a search or seizure under the federal and state constitutions. This is one such case. In this case, a divided Wisconsin Supreme Court determined that police may seize and search a person's garbage without a warrant.

State v. Mitchell 169 Wis.2d 153 (1992)
This case illustrates legislative action against bigotry and the possible conflict between such laws and the free speech guarantees of the federal and state constitutions. Here, the Wisconsin Supreme Court, on a 5-2 vote, found unconstitutional a state law which enhanced the penalty for a crime if the victim was selected on the basis of characteristics such as race or sexual orientation. The U.S. Supreme Court reversed that decision.

Thompson v. Benson 199 Wis. 2d 674 (1996)
This case illustrates the restrictions the Wisconsin Constitution places on legislative enactments and the checks and balances that exist in a three-branch system of government. Here, the Wisconsin Supreme Court stopped an attempt to take powers away from the elected state superintendent of schools and give them to gubernatorial appointees.

Libertarian Party of Wisconsin v. Thompson 199 Wis.2d 790 (1996)
This case began and ended in the Wisconsin Supreme Court; the Court took original action rather than sitting (as it normally does) as an appellate court. The case illustrates the restrictions the state Constitution places on private laws and laws contracting public debt. While the Court has shot down taxes collected for a specific purpose in other cases, it found here that Wisconsin Act 56, which created a tax in five counties to raise money for a new Milwaukee Brewers stadium, served a legitimate public purpose by encouraging economic development and tourism and reducing unemployment.

Risser v. Klauser 207 Wis.2d 177, N.W.2d (1997)
This case is one of a number of cases focusing on the governor's veto power that have come to the Wisconsin Supreme Court. The case began and ended in the state's high Court, with the Court taking original action rather than sitting as an appellate court. Its 4-3 decision served to further define the veto power of the governor and the constitutional separation of powers between the executive and legislative branches.