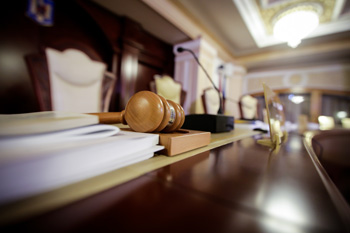 The Court of Appeals is the state's intermediate appellate court. The court is composed of 16 judges from four districts headquartered in Milwaukee, Waukesha, Wausau, and Madison.

History of the seal

The seal for the Wisconsin Court of Appeals, approved by the Supreme Court in 2000, is based on a design originally commissioned in 1958 by the State Bar of Wisconsin. This "Lady Justice" was the model for a large wrought-iron sculpture for the entry wall of the Bar's then-new headquarters in Madison. The figure eventually became the association's official logo, appearing on State Bar stationery and publications for many years. The sculpture, which was removed when the Bar Center was remodeled in the 1990s, was then mounted above the Carroll Street entrance of the former Dane County Courthouse on Martin Luther King Jr. Blvd. In 2006, it was moved to the new courthouse and is mounted upon the South Hamilton Street façade.

The seal's creator, James S. Watrous, was an artist and professor of art and art history at the University of Wisconsin from 1935 to 1978. Watrous is perhaps best known for the colorful Paul Bunyan murals he completed in the Memorial Union in 1936. He is also remembered as the person who nearly single-handedly brought the University of Wisconsin's Elvehjem Museum of Art into being.

Watrous, who died in 1999 at age 90, was also a respected author, mosaicist, and watercolorist whose works have been exhibited at the Walker Art Center in Minneapolis, the Carnegie Institute, and the Pennsylvania Academy of the Fine Arts. His murals, painted under the aegis of the Works Progress Administration in the 1930s and early 1940s, grace the lobbies of federal buildings in Grand Rapids, Minnesota, and Park Falls, Wisconsin.

Watrous's widow, Margaret Modie Watrous, his daughter, Lynne Watrous Eich (wife of Court of Appeals former Chief Judge William Eich), and his sons, Stephen and Tom, granted the court permission to use the design for its new seal.