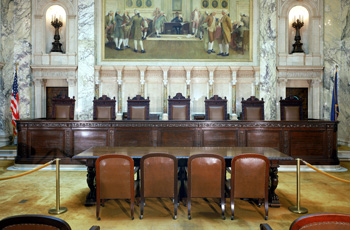 In addition to its law-declaring function, the Supreme Court has administrative and regulatory authority over all Wisconsin courts and the lawyers who practice law in Wisconsin.

History of the seal

The seal of the Supreme Court of Wisconsin is rich in symbolism. It shows a scale of justice, not held by the blind-folded Greek Goddess Themis, but by a human hand and arm. Thus, it recognizes that justice is in human hands.

Above the scale is the ancient symbol of the all-seeing eye of deity.

The seal was created sometime after August 12, 1848, when a joint resolution of the legislature provided that Edward H. Rudd be employed to engrave "a great seal for the state of Wisconsin and seals for the circuit courts and judges of probate of the several counties and supreme court of the state."

The resolution instructed Rudd to follow an existing pattern for seals currently in use, replacing the word "territory" with "state".

Seven months later, Governor Nelson Dewey signed into law a bill which authorized the secretary of state to "employ a competent and skillful engraver to engrave a seal for the supreme court, and the great seal of the state…"

The new law, Chapter 202, further authorized the secretary of state "to procure a good and substantial seal press for the use of the state and the supreme court," and provides that the costs will be paid out of the state treasury.