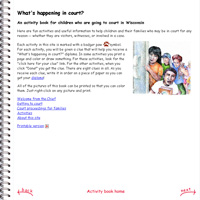 One day you may go to a courthouse as a witness, juror, visitor, or for some other reason. The activities in "What's Happening in Court?" (2001) explain what happens in court, who works there, and what the rules are. Learning about the courts is an important way to prepare yourself to be a responsible citizen. (This popular booklet was adapted from a publication created in 1999 by the California Office of the General Counsel, Administrative Office of the Courts).

Note: Most of the following sites are not maintained by the Wisconsin Court System.