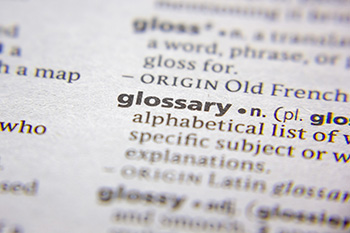 Answer: The legal document filed by the defendant in response to a lawsuit by the plaintiff.

Argument: The discussion on matters of the law that takes place between attorneys and the court.

Bailiff: The bailiff is the person assigned by the court to supervise and escort jurors. Bailiffs may be either sworn deputy sheriffs who also are responsible for court security, or county employees whose only duty is to attend to jurors.

Bench: The desk in the courtroom occupied by the judge; more broadly, the court itself.

Challenge for cause: When, during the selection of a jury, an individual juror is excused or discharged by the judge for a reason required or permitted by law. For example, the juror may be a friend or relative of one of the parties to the case, or may be employed by a business that is part of the case.

Chambers: The private office of the judge.

Charge or count: Each specific accusation against the defendant in a criminal case.

Civil case: A lawsuit among individuals or organizations for determination, enforcement, and/or protection of a right, or for the correction and/or prevention of a wrong. For a plaintiff to win a civil case the case must be proved by a preponderance of the evidence.

Closing statement or closing argument: The summary of the facts and their interpretation of the law by the opposing parties at the end of the trial for purpose of persuading the jury to their point of view. These statements or arguments are not evidence.

Complaint: The legal document filed by the plaintiff to start a lawsuit and make a claim against the defendant in a civil action, or to specify each accusation against a defendant in a criminal action.

Counterclaim: The legal document filed by the defendant to make a claim back against the plaintiff in a civil action.

Criminal case: The action by a government to penalize a violation of the criminal laws. In Wisconsin criminal cases are filed by the District Attorney when state charges are involved, or by the attorney for a city or county when county or municipal ordinances are involved. Criminal cases must be proved beyond a reasonable doubt for a conviction.

Cross-examination: The questioning of a witness in a trial by the party that did not call the witness to testify.

Deliberation room: The private room apart from all other activities where jurors deliberate at the end of the presentation of evidence. Jurors also will use this room during recesses and other breaks in the trial.

Defendant: The person or organization named in a lawsuit by the plaintiff or the person who has been charged with a violation of the criminal laws.

Direct examination: The questioning of a witness in a trial by the party that called the witness to testify.

Evidence: The proof presented to the jury by each side in a trial in the form of sworn testimony by witnesses and by exhibits.

Exhibit: A paper, document, or other object presented during the trial to support the claims of each party. Exhibits may be medical records, a weapon, photographs or any other relevant object.

Exit questionnaire: A written questionnaire the court requests jurors to complete at the conclusion of their service. The purpose is to ask jurors to provide feedback on their experience and offer suggestions from the perspective of a juror to improve the process. Some courts distribute questionnaires to all jurors, others use a sampling technique.

Foreperson, or presiding juror: The juror selected by the jury panel to organize and lead their discussion and speak on behalf of the jury.

Grand jury: A jury of inquiry called by the prosecutor's office to hear the evidence presented and determine if it is sufficient to proceed with a criminal charge. Grand juries do not deliberate and reach a verdict of guilt or innocence. In Wisconsin grand juries are made up of 17 jurors. Use of grand juries is very rare. Unlike the petit jury trial, grand jury proceedings are secret.

Hung jury: When the jury panel is unable to reach agreement and come to a unanimous verdict in a criminal trial or have 5/6ths of the jurors agree on a verdict in a civil trial.

Jury box: The seats in the courtroom where the jury sits during a trial. These are normally enclosed within a rail or half-wall and the rows are raised to improve the ability of jurors to see and hear courtroom activities.

Jury panel: The group of people participating as jurors in a court trial.

Jury trials: A court proceeding where a jury listens to conflicting evidence and makes the final decision using rules given by the judge.

Litigants: The people with a dispute in court. Another name for the parties to the case.

Motion: A request to the judge to order something.

Object: To oppose a statement or procedure in court by a party.

One day/one trial: A jury service system where a prospective juror is required to be available to serve one day or the full length of a trial, whichever is longer.

Opening statements: The presentation by each party of the facts they expect to present.

Orientation: The activity at the beginning of a juror's term of service when court personnel welcome the jurors, explain procedures and answer questions.

Overruled: To decide against the objection of a party.

Parties: The parties are each side in a case, the plaintiff and defendant. There can be more than one plaintiff and/or defendant in a case. Parties may be represented by an attorney or they may represent themselves.

Per diem: This is Latin for "each day" and is the term used to refer to the payment or the rate of payment of jurors. For example, in Eau Claire County, jurors' per diem rate is $25.

Peremptory challenge: The right of the parties to excuse a limited number of prospective jurors during voir dire without giving a reason.

Petit jury: The jury participating in the trial in circuit court. A group of persons summoned from the county and sworn to hear issues of fact and to reach a verdict.

Poll the jury: When the jurors are asked individually whether he or she agrees with the verdict presented to the court.

Prosecutor: The attorney who represents the State of Wisconsin in criminal cases. In Wisconsin the prosecutor in circuit court is the district attorney, although county corporation counsel and the attorneys who represent municipalities also may prosecute some types of cases.

Rebuttal: The presentation of additional evidence to show the testimony of a witness is not true.

Rest: When a party has finished presenting all their evidence and calling all their witnesses they are done and are said to rest their case.

Source lists: The lists from which the names of prospective jurors can be selected are set by law. Each court must use a list supplied by the Wisconsin Department of Transportation of licensed drivers, and those with identification cards. The Director of State Courts may choose to supplement the DOT list with other lists as specified by law.

Stand: The chair at the front of the courtroom where witnesses sit while testifying.

Strike testimony: The elimination of testimony which is not to be considered by the court or jury in making a decision. The judge will decide when testimony shall be stricken.

Subpoena: The legal document used to require a witness to come to court and testify.

Summons: An official letter or notice. A jury summons requires a citizen to make himself or herself available for jury service for a specific period of time.

Sustained: To decide in favor of an objection of a party.

Testimony: Statements given by a witness, under oath.

Voir dire: Literally, "to speak the truth."" The questioning of prospective jurors to determine whether they are qualified to serve on the jury for that case.

Witnesses: Persons who testify to what they have seen, heard, or know firsthand.