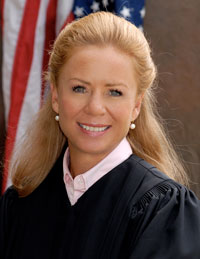 Wisconsin Supreme Court Justice Annette Kingsland Ziegler today was elected by her fellow justices as the state's next chief justice, effective May 1, 2021. Ziegler will take over from the current Chief Justice Patience Drake Roggensack, who did not seek re-election to the post but remains on the Court.

"Being chosen to serve as Chief Justice of the Wisconsin Supreme Court is truly the honor of a lifetime," Ziegler said. "It's a long way from sweeping the floors of my parent’s hardware store, but I know the lessons I learned back then formed the foundation for how I will approach this awesome responsibility. I will do all I can to ensure the Wisconsin Supreme Court operates fairly and efficiently with a fidelity to the law. We will make the people of this great state proud of our professionalism and collegiality, even during our sometimes vigorous debates. I want to thank my colleagues for their faith in me, especially Chief Justice Roggensack who has set a wonderful example for me to follow. I’m grateful she is remaining on the Court and will be a tremendous resource for me."

Pursuant to Article VII, Section 4 (3) of the Wisconsin Constitution, the chief justice of the Supreme Court is the administrative head of the judicial system and exercises administrative authority pursuant to procedures adopted by the Supreme Court. In this role, the chief justice works with fellow justices, the director of state courts, chief judges and other administrators to ensure the courts operate smoothly and efficiently.

Ziegler said her efforts as chief justice will build on the framework already in place as circuit courts throughout the state continue working to ensure their courts are operating as safely and efficiently as possible in light of the COVID-19 pandemic.

Ziegler was first elected to the Supreme Court in 2007 and re-elected in 2017. Born in Grand Rapids, Michigan, Justice Ziegler received her bachelor's degrees in Psychology and Business Administration from Hope College in Holland, Michigan in 1986. She earned her law degree from Marquette University in 1989. Justice Ziegler received the Marquette Law School Alumna of the Year award in April, 2019, and also received the Distinguished Alumni Award from Hope College in April, 2014.

Upon graduation from law school, Justice Ziegler was in private practice where she engaged in civil litigation. She also served as a pro bono special assistant district attorney in Milwaukee County in 1992 and 1996. Immediately prior to serving as a circuit court judge, she was an assistant United States attorney for the Eastern District of Wisconsin.

Before joining the Supreme Court, she served as a Washington County Circuit Court judge from 1997 to 2007, including service as deputy chief judge of the Third Judicial Administrative District.

Back to current headlines