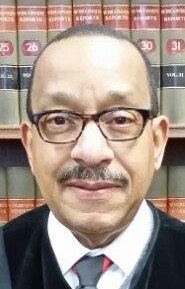 The American Judges Association presented Milwaukee County Circuit Court Judge Marshall B. Murray with the Judge Libby Hines Domestic Violence Award during a ceremony at the group’s annual conference in Philadelphia on Aug. 30.

Murray was honored for his decades-long commitment to educating judges, nationally and internationally, on issues of family violence, including teen dating violence, intimate partner violence and child abuse.

“This national recognition is more than well-deserved,” said Wisconsin Supreme Court Chief Justice Annette Kingsland Ziegler. “Judge Murray has dedicated a good part of his career to sharing knowledge and teaching fellow judges about the most effective ways to handle domestic violence-related cases. He has had a very positive impact, not only on the Wisconsin court system, but on many judges across the country.”

Retired Judge Libby Hines, who presented the award, said Judge Murray’s passion, expertise and leadership in the field and his exceptional ability to facilitate meetings and trainings for judges have positively impacted hundreds, if not thousands, of judges.

“I have no doubt that Judge Murray has helped to make many communities, in addition to his own, safer, and he has improved – or even saved – the lives of women and children across the United States,” Hines said.

Murray was first appointed to the bench in 1999, elected in 2000 and has been re-elected three times. He had previously served as head of the Domestic Violence Unit in the Milwaukee County District Attorney’s Office and as a Milwaukee County Judicial Court Commissioner. Murray currently serves in the Children’s Court Division. He is chair of the Wisconsin Judicial Committee on Child Welfare (WJCCW) and is the vice-chair of the Wisconsin Commission on Children, Families and the Courts.

Murray has also served as Presiding Judge of the Milwaukee County Domestic Violence Courts, the Family Court Division, the Probate Court Division, and the Children’s Court Division. He has been a lecturer and Board member of the National Center on Domestic and Sexual Assault in Austin, Texas, a national advisor to the Battered Women’s Justice Project, a Trustee of the National Council of Juvenile and Family Court Judges (NCJFCJ), and faculty for the National Judicial Institute on Domestic Violence (a project of NCJFCJ), Futures Without Violence, and the U.S. Department of Justice Office on Violence Against Women.

Murray is a highly-sought after facilitator and serves in that capacity for the national Judicial Engagement Network of Domestic Violence Judges, “JEN”, a project of the DOJ Office on Violence Against Women, NCJFCJ, and the Center for Court Innovation.

Murray received a standing ovation from the judges at the association’s awards ceremony. He is the second Wisconsin Judge to win the award, which went to La Crosse County Circuit Court Judge Ramona Gonzalez in 2017.


The American Judges Association is one of the largest independent organizations of judges in the United States.

Back to current headlines